First Simple test of the lSM303DLHC

Procedures:
The digital compass was kept in my basement which was 67 Fahrenheit.  The compass was attached to a tripod by means of a nut glued to the base of the compass for this purpose. The compass was pointed across a room at the corner of the house where two walls meet approximately 20 feet away. Then the compass was turned on. The operator waited at least two seconds between measurements. The operator pressed the pause button on the heading screen. The heading was recorded, then the pause button pressed again to begin the next measurement. After a delay greater than 1 second, the procedure was repeated for 48 data points. 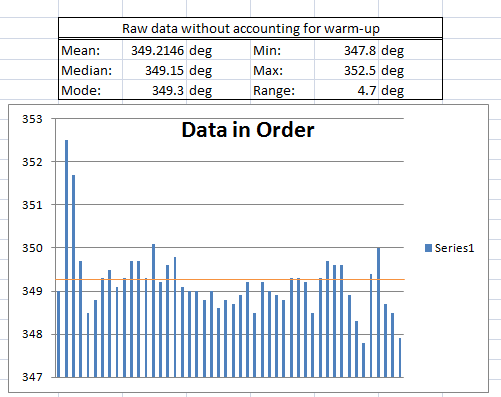 Without accounting for the initial 3 points being major outliers, we get a result that shows a variation of 4.7 degrees. This is clearly not sufficient for a cave compass and other changes would have to be made to the circuit or the test in order to improve upon this. However, we should first determine ideal results without the startup points.

Results after removing the first 4 points from the calculations 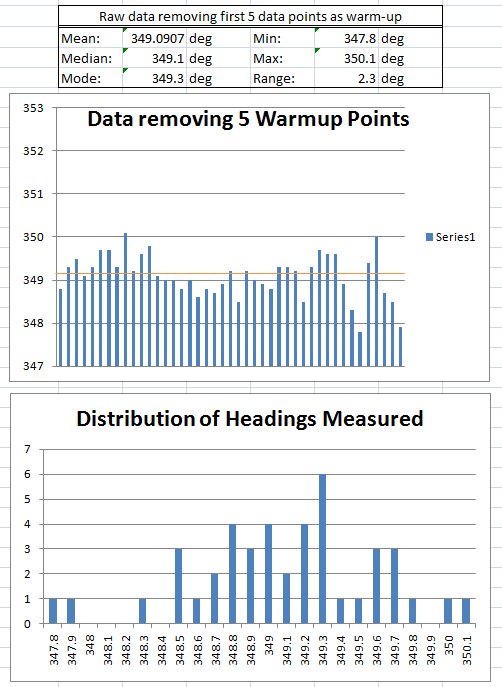 These results are much more promising. The variation was 2.3 degrees which is closer to what we would see in the field. Through testing this will need to be improved upon in future firmware releases.